“The ultimate weakness of violence is that it is a descending spiral, begetting the very thing it seeks to destroy. Instead of diminishing evil, it multiplies it. Through violence you may murder the liar, but you cannot murder the lie, nor establish the truth. Through violence you murder the hater, but you do not murder hate. In fact, violence merely increases hate…Returning violence for violence multiplies violence, adding deeper darkness to a night already devoid of stars. Darkness cannot drive out darkness; only light can do that. Hate cannot drive out hate; only love can do that.” Dr. Martin Luther King.

One an African American life lost by the used of  excessive Law- enforcement force is one to many. Between 2013 and 2019, police in the United States killed 7,666 people, according to data compiled by Mapping Police Violence, a research and advocacy group.  The great majority of the dead were African Americans and Latino U.S. citizens.

The number of African American and Latinos killed by police force in the United States i a National disgrace! The evidence of racial overtones by law enforcement to say the least is extremely eloquent! Unsurprisingly, the three largest states – California, Texas and Florida – have the highest total number of killings of Black people by police officers. Once these figures are adjusted for the population size and demographics, in nearly every state, African Americans face a significantly higher risk of being killed by police officers than white Americans.

In Utah, the African Americans comprise just 1.06 percent of the population but they accounted for 10 percent of police killings over the past seven years – a disproportional rate of 9.21 times. In Minnesota, Black Americans are nearly four times as likely to be killed by law enforcement, with Black victims comprising 20 percent of those killed, despite comprising only 5 percent of the overall population.Source “mapping Police violence”

99% of killing of citizens by the by police from 2013-2019 have not resulted in officers being charged with a crime.There

“There Is no accountability!

I have been  disturbed by President Trump’s play-book of preparing the battle terrain for an American “Coup d’etat”.  Please read this. This IS MUST READ! :

What would it take for Republican leaders to admit to themselves that Trump’s loyalty cult is destroying the country they claim to love? @anneapplebaum asks. https://www.theatlantic.com/magazine/archive/2020/07/trumps-collaborators/612250/?utm_source=twitter&utm_medium=social&utm_campaign=share
Violence may be the by product of the Polarizing policy of Donald J Trump in order to pretend staying in power after his term ends on January 20, 2021. Protetsters must follow the non-violence examples of Martin Luther King. We must learn from Dr. King’s wisdome when he said:

“The ultimate weakness of violence is that it is a descending spiral, begetting the very thing it seeks to destroy. Instead of diminishing evil, it multiplies it. Through violence you may murder the liar, but you cannot murder the lie, nor establish the truth. Through violence you murder the hater, but you do not murder hate. In fact, violence merely increases hate…Returning violence for violence multiplies violence, adding deeper darkness to a night already devoid of stars. Darkness cannot drive out darkness; only light can do that. Hate cannot drive out hate; only love can do that.”

It began with his strong opposition in considering the possibility of voting by mail due to the Covid-19 . A desperate Trump after his mega failure in dealing with the spread of the virus and 36,000 American lives were lost because he dismantled the  Anti-pandemia structure left by Barack Obama om order to contain a massive spread of deadly virus Covid-19 and instead that he is using our men and women in uniform In order to intimidate protester across a divided and polarized Nation. He is responsible for the late start of an effective containment plan and the 36,000 lives that could have been prevented. He has perfected the “blaming game” in order to try to remain in power after November 3, 2020 elections.

He went as far as designating the Chair of the Joint Chief of Staff of the military operation to contain the protester.

General Mike Milley accepted the dishonor task and clean Lafayette Park of protesters in order for Trump to have a photo up with an upside bible in front of the St John Church in Washington. But the general in an act of patriotism wrote a very revealing memo to the military forces of our Nation~! 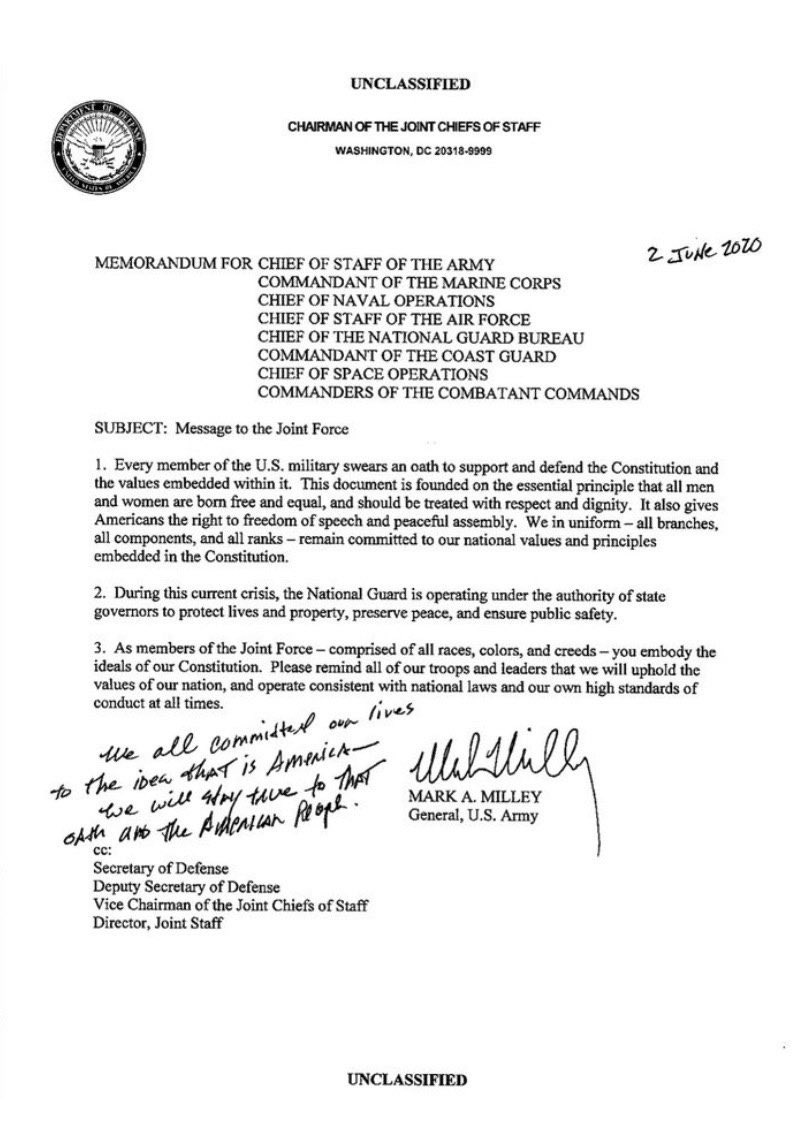 Trump in desperation is acting with a bunker mentality. He has met in secret  and on multiple of occasions with High military commanders and senior Pentagon officials preparing the ground in the event of being defeated on November 3, 2020 elections. The the most precise and revealing analysis was made by The Washington Post National security news-writer Greg Miller. I am compelled to quote his mind- blowing analysis:

The scenes have been disturbingly familiar to CIA analysts accustomed to monitoring scenes of societal unraveling abroad — the massing of protesters, the ensuing crackdowns and the awkwardly staged displays of strength by a leader determined to project authority.

In interviews and posts on social media in recent days, current and former U.S. intelligence officials have expressed dismay at the similarity between events at home and the signs of decline or democratic regression they were trained to detect in other nations.

“I’ve seen this kind of violence,” said Gail Helt, a former CIA analyst responsible for tracking developments in China and Southeast Asia. “This is what autocrats do. This is what happens in countries before a collapse. It really does unnerve me.”

Helt, now a professor at King University in Tennessee, said the images of unrest in U.S. cities, combined with President Trump’s incendiary statements, echo clashes she covered over a dozen years at the CIA tracking developments in China, Malaysia and elsewhere.

Marc Polymeropoulos, who formerly ran CIA operations in Europe and Asia, was among several former agency officials who recoiled at images of Trump hoisting a Bible in front of St. John’s Episcopal Church in Washington after authorities fired rubber bullets and tear gas to clear the president’s path of protesters.

“It reminded me of what I reported on for years in the third world,” Polymeropoulos said on Twitter. Referring to the despotic leaders of Iraq, Syria and Libya, he said: “Saddam. Bashar. Qaddafi. They all did this.”The Washington Post

Read the full article on this link: https://www.washingtonpost.com/national-security/cia-veterans-who-monitored-crackdowns-abroad-see-troubling-parallels-in-trump-handling-of-protests/2020/06/02/7ab210b8-a4f6-11ea-bb20-ebf0921f3bbd_story.html

The impression Trump created was only reinforced by others in the administration.

surrounding protesters, as if describing U.S. cities as a foreign war zone.”

of the Joint Chiefs of Staff, toured the streets of the nation’s capital in his battle fatigue uniform.”

Trump is losing the power game with Joe Biden. As he dives south in the polls, the more incoherent his policies and behavior will be.  In a poll made public two day ago Trump was trailing by 10%. and he is imitating and copying the playbook used by Vladimir Putin and other lesser dictators! One of Trump’s favorite book is one written by Robert  Ringer Winning Through Intimidation.”

Trump was in favor mail-in ballots. Now after his disaster in handling the Covis-19 crisishe is against it. He sees the writing on his wall on November3, 2020, he is adamantly against it with his pittbull Attorney General William Barr! States governor are all considering the electoral mechanism.

Trump is outlaying his plan not to vacate The White House after the elections! Be ready GOP for a rough ride! GOP leaders don’t care becauswe with tTrump they all enriching themselves at the expense of the Middle and working Class. He was for voting by mail and now he is against it! Don’t be surprised of a fall surprise of the first Amercian “Coup d’ etat”by trump in order to try to remain in power after losing the election to the former Vice-president. If you don’t see it you don’t see it!  Trump has been promoting a polarizing atmosphere with China. Remember “wag the dog?” May be creating another military crisis scenario with China as part of his dictatorial playbook to pretend staying in power ! The worst is yet to come!